To share your memory on the wall of Eldon Craig, sign in using one of the following options:

To send flowers to the family or plant a tree in memory of Eldon James Craig, please visit our Heartfelt Sympathies Store.

We encourage you to share your most beloved memories of Eldon here, so that the family and other loved ones can always see it. You can upload cherished photographs, or share your favorite stories, and can even comment on those shared by others.

Posted Mar 13, 2021 at 05:58pm
To All The Craig Family: I am so sorry to learn that Eldon has passed away. What an amazing guy, what a full life. He was always so kind and generous with his time when we would come to visit him, your Mom, and all your family at the farm. I have fond memories of talking with him about his ride in the Centennial Cattle Drive along the Chisholm Trail, him taking me for a ride in his horse-drawn buggy, and our family dinner at the Italian restaurant before our last family reunion. He was a true cowboy and a real gentleman. My deepest sympathies to you all. Love, Suzy Lashley

Flowers were purchased for the family of Eldon Craig. Send Flowers

Posted Mar 12, 2021 at 01:00pm
Met Eldon and Aletha when Bakers moved on Wheatridge Road in 1967. Eldon was the best farmer and neighbor, plus great cowboy and lifetime supporter of 4-H and FFA. Entire family true leaders in the Drummond/Imo communities. God Bless his family. Lloyd Baker Family/Darlene Baker Reynolds
Comment Share
Share via: 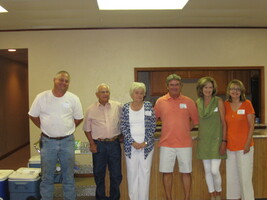