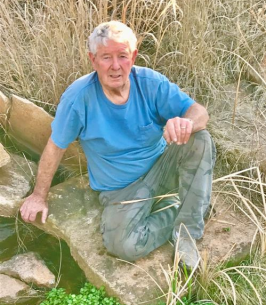 A Celebration of Life Service for Cecil Thorp age 82 of Enid will be 10:00 am Wednesday, June 1, 2022 at Ladusau-Evans Chapel with Rev. Alan Seibel officiating. Burial will follow in the Memorial Park Cemetery under the direction of Ladusau-Evans Funeral Home.
Cecil was born January 7, 1940 in Helena, OK to Bert and Lilly (Williams) Thorp and passed away May 26, 2022 at his home. He attended and graduated from Helena High School in 1958. He attended Enid Business College. He married Judy Anthony on September 4, 1959 in Helena. Cecil worked for Owens Supply for several years and later went to work for Union Texas Petroleum and Gas and retired in 2002; before he worked at American Measurement. He was a member of Oakwood Christian Church. He enjoyed being at the David Allen Ballpark with his dog Maggie. Cecil enjoyed watching his grandkids play.
Cecil is survived by his wife Judy of the home, son Mitchell Thorp and wife Maiya, daughter Sissy Mayberry and husband Bill, grandchildren; Mandy Mayberry, Megan Kelly and husband Tim, and Maddux Mayberry, Collin and wife Julia, Jacob, and Luke Thorp, five great grandchildren, brothers; Hollis Thorp and wife Pam and Otho Jr. Thorp and wife Deanna, and several other family members and his sidekick Maggie.
Cecil is preceded in death by his brothers Virgil, and Terry; and his parents Burt and Lilly Thorp.
Memorials may be made to Hospice Circle of Love or Enid SPCA with Ladusau-Evans Funeral Home serving as custodians of the funds.
Condolences may be made online and the service may be viewed online at www.ladusauevans.com