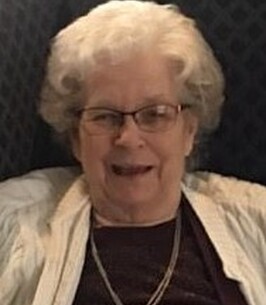 A Celebration of Life service for Cleva Dee Ann (O’Neal) Beelendorf, 82, of Sunbury, Ohio, formerly of Enid, will be 10:00 a.m., Tuesday, July 19, 2022 at Ladusau-Evans Chapel officiated by Pastor David Reber, Jr. Burial will follow in Memorial Park Cemetery under the direction of Ladusau-Evans Funeral Home.
Cleva was born August 17, 1939, in Enid, Oklahoma, the daughter of Raleigh and Lena (Koehn) O’Neal and step-father Albert Stratton. She passed peacefully on Wednesday, July 13, 2022 after battling with multiple strokes over the last few years.
She was married to Art Beelendorf on January 16, 1959 in Columbus, Ohio while he was serving in the Air Force at the now closed Lockbourne AFB. She was the consummate military wife, moving almost yearly, along with experiencing long periods of time when he was stationed overseas without his dependents. The highlight was when Art was stationed to Rhein-Main AFB in Frankfurt, Germany and she (and their children) were able to accompany him.
Art retired from the Air Force and they settled in Cleva’s hometown of Enid. They were members of St. Paul’s Lutheran Church, and enjoyed spoiling their grandchildren, square dancing and traveling each summer. Cleva worked for multiple companies in Enid including Champlin Refining Company and Enid Public Schools.
She was preceded in death by her husband, parents, brothers Raleigh Harvey O’Neal Jr, Ernest “Buster” O’Neal, Jimmy Dale O’Neal, Robert Eugene O’Neal and Cecil Ray O’Neal and sisters Margie Wright and Betty Ellen O’Neal. Survivors include her daughter Debra (Greg) Miller of Sunbury, Ohio, and son John Beelendorf of Columbus, Ohio, both graduates of Chisholm High School. She has 4 grandchildren, Sara (Clay) Gallow, Jessica (Karl III) Bame, Aspen Beelendorf and Logan Beelendorf, and her sister, Violet Douglas of Enid. She has 3 great-grandchildren, Karl Bame IV, Emmalyn Bame and Riley Gallow and numerous nieces and nephews. She will be greatly missed by her family & friends!
A small viewing will be held at Devore-Snyder Funeral Home in Sunbury, Ohio on Friday, July 15, 2022 from 4:30 to 5:30.
Condolences may be made and services viewed at www.ladusauevans.com.